Who Hates America Now . . . or where future terrorist will come from

The list includes peoples from around the world, now add the Kurds . . . Central Americans, Africans, Afghanis, Palestinians, Ukrainians, South and North Koreans, Chinese, British, the EU, Australians, Kiwis . . . and that's just the ones t has pissed off.

Hüsker Dü said:
The list includes peoples from around the world, now add the Kurds . . . Central Americans, Africans, Afghanis, Palestinians, Ukrainians, South and North Koreans, Chinese, British, the EU, Australians, Kiwis . . . and that's just the ones t has pissed off.
Click to expand...

This time you shall not pass 'cause I'm the dragon smog,
I'm a small axe move big trees you still play with Lincoln logs

Hüsker Dü said:
The list includes peoples from around the world, now add the Kurds . . . Central Americans, Africans, Afghanis, Palestinians, Ukrainians, South and North Koreans, Chinese, British, the EU, Australians, Kiwis . . . and that's just the ones t has pissed off.
Click to expand...

Especially amusing has been the spectacle of those who pronounced themselves anti-Stalinists and denounced the socialist countries at every turn and yet even today applaud each new revolution, although any damned fool has to know that most of them will end in the same place. For that matter, how could we have survived politically were it not for the countless liberals who, to one extent or another, supported us, apparently under the comforting delusion that we were social reformers in rather too much of a hurry—a delusion we ourselves never suffered from.

There are liberals and liberals, and a distinction would have to be made in a more leisurely presentation. Even in academia there are indeed those who defend liberal principles tenaciously and honorably. But the countless opportunists and careerists who dominate the historical associations call themselves liberals as a matter of political convenience. They went with the McCarthyite flow in the 1950s and go with its left-wing variant today. In the unlikely prospect of a fascist or communist ascendancy tomorrow, they may be counted on to apply for party cards as soon as it looks like the smart move

On May 11, 1992, having been invited by the right-wing American Enterprise Institute to reflect on the collapse of the socialist countries, I summoned up whatever capacity I have for dissembling in an effort to deflect the one question I did not want to answer. I did not want to answer it before a right-wing audience because I feared I would unleash my Sicilian temper and counterattack with the litany of the crimes of the imperialists and their insufferable apologists. I began:

It is a great pleasure to be with you today although, since I claim expertise only as a historian of the Old South, I speak on current issues with trepidation. I do hope that your invitation carries no sadistic intent—that you do not expect an autobiographical mea culpa. For while it is true that I have been a Marxist and a bitter-end supporter of the Soviet Union, I dislike autobiographies and admire the CIA's noble dictum, "Admit nothing, explain nothing, apologize for nothing." The audience responded with good-natured laughter. Generally speaking, rightwingers are decidedly more courteous than we of the left and would not think of abusing their guests, as I probably would have abused them if challenged.

We easily forget the economic rationale that Marx taught us, namely, that socialism would have to provide unprecedented abundance if it were to sustain social liberation of any kind. With a few notable exceptions, leftists no longer find it fashionable to discuss economics at all beyond the now-routine rejection of a "command economy" and some disingenuous mumbling about the necessity for markets. But where is there a serious attempt to determine the extent to which any socialism could function without a command economy or to show how a socialist economy could integrate markets? A few left-wing economists, most notably, Louis Ferleger and Jay Mandle tried to raise these questions long before the collapse of the socialist economies, but they were effectively shut out of the left-wing press and are still ignored. And we may doubt that the wry remark of Nancy Folbre and Samuel Bowles, two other respected left-wing economists, will cause a wrinkle: "Leftwing economists— among whom we count ourselves—have thus far failed to come up with a convincing alternative to capitalism." (Nancy Folbre and Samuel Bowles, letter to the Nation, Nov. 29, 1993; and see also, Louis Ferleger and Jay R. Mandle, A New Mandate: Democratic Choices for a Prosperous Economy, University of Missouri Press, 1994).
N

And..........do you Mr 100 % DIPSHIT really want to take the position
of leaving 50 AMERICAN troops in harms way when the President
of Turkey GAVE YOU A HEADS UP of his intent to invade and
left you an opening to have 0 % of OUR Troops injured or killed
while two " Tribes " go at it.....

Is THAT what YOU would DO with OUR AMERICAN TROOPS...!!!!

FRD -- The Sociology and Psychology of Terrorism

These illegal acts hurt US national security. Abu Ghraib was used as a rallying cry by terrorist groups who were fighting American troops in Iraq and Afghanistan. As one US military interrogator wrote: “I learned in Iraq that the No 1 reason foreign fighters flocked there to fight were the abuses carried out at Abu Ghraib and Guantanamo … The number of US soldiers who have died because of our torture policy will never be definitively known, but it is fair to say that it is close to the number of lives lost on September 11, 2001.”

Today, America is in a moral crisis as its government takes children away from undocumented migrants and asylum-seekers at the US border. It is difficult to imagine something crueler than taking a child away from parents. These people are often fleeing violence and danger and are in search of a better life. The sounds of children crying in US jails while guards crack jokes are eerily evocative of US guards at Abu Ghraib posing smiling for pictures with naked Iraqi prisoners in humiliating positions.

As George Takei – who was imprisoned by the US government in an internment camp as a child during the second world war – pointed out, not even those Japanese-Americans imprisoned during the war were separated from their parents. In America today, border agents reportedly told parents their children were getting bathed and then never came back, evoking Nazis taking away children in death camps and telling people being led to the gas chambers that they were going to take a shower. 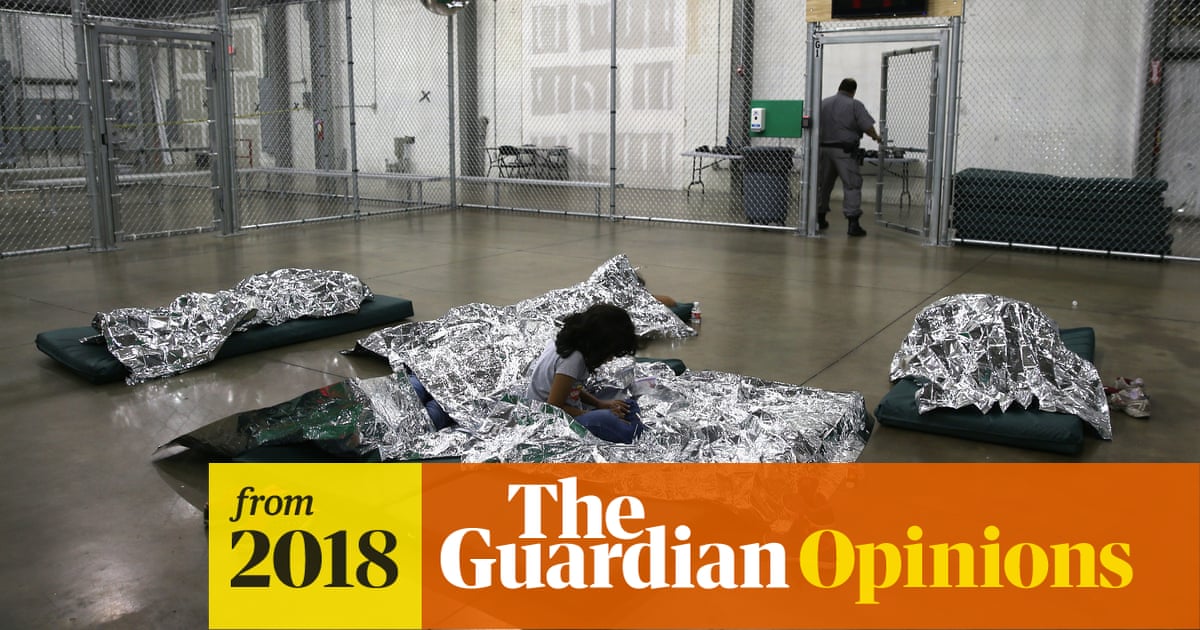